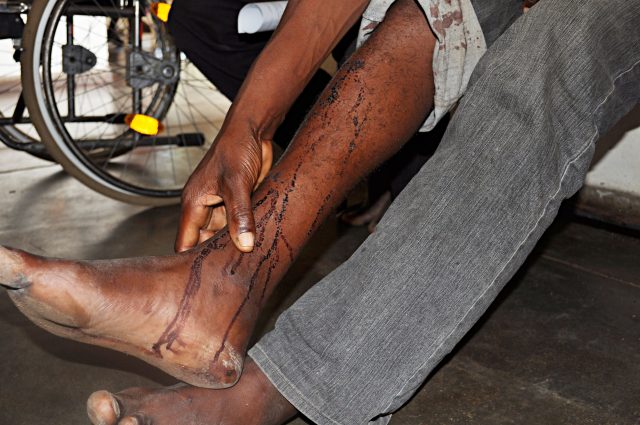 The six villagers who reside in Chinyamukwakwa village in Chisumbanje in Manicaland province sustained several injuries while some of them were left wheel-chair bound owing to severe assault by ZRP officers in January 2015 following a land ownership wrangle between ethanol producer Green Fuels and the villagers.

The villagers namely Vaina Ndlovu, Maxwell Mtisi, Chipo Chiripinda, Eddie Mabere, Samson Muyambo, and Mugovera Makaza were approached while they were working in their fields and were indiscriminately assaulted by ZRP officers who used truncheons and open hands all over their bodies before arresting and detaining them at Chisumbanje Police Station. While in detention, the villagers said they were denied food and water by ZRP officers.

After being brutalised, the villagers were assisted by Langton Mhungu, Peggy Tavagadza and Blessing Nyamaropa of Zimbabwe Lawyers for Human Rights to file summons at Chipinge Magistrates Court against the Officer In Charge at Chisumbanje Police Station only identified as Mazarura, Chihuri and Chombo claiming damages for pain and suffering emanating from the police assault.

As a result of the assault, one of the villagers is now suffering from reduced hearing and has a torn ear drum with a possibility of deafness and long term ear infections.

Mazarura, Chihuri and Chombo opposed the villagers’ claim and denied assaulting or ill-treating them and indicated that they were lawfully arrested for engaging in public violence at Macdom Estate.

But Magistrate Gwezhira on Thursday 16 March 2017 ruled that the villagers had submitted enough evidence to prove that they suffered damages from ill-treatment by ZRP officers and that the force used by some ZRP officers was “too much” taking into cognisance the fact that they were heavily armed against mere villagers who were tilling their fields.

Magistrate Gwezhira ordered Mazarura, Chihuri and Chombo to pay $500 to each of the six villagers for pain and suffering and in addition, $901 to Ndlovu, $735 to Muyambo and $60 to Chiripinda for medical expenses incurred when they sought treatment.