THE wife of a missing retired member of the Zimbabwe National Army (ZNA) on Wednesday 28 November 2018 withdrew an application she filed early this week seeking an order compelling Zimbabwean authorities to account for the whereabouts of her husband after he managed to escape from his assailants.

Sibongile Sarukato had on Monday 26 November 2018 filed an urgent habeas corpus application on behalf of her husband Retired Lieutenant Colonel Elliot Piki seeking an order compelling the State to do all things necessary to determine his whereabouts after he was abducted by some unknown assailants on Sunday 25 November 2018.

Sarukato, who was represented by Jeremiah Bamu and Obey Shava of Mbidzo Muchadehama and Makoni Legal Practitioners, who are members of Zimbabwe Lawyers for Human Rights (ZLHR), asked the High Court to order the setting up of a team of investigators, to work closely and in conjunction with lawyers appointed by ZLHR to search for Retired Lieutenant Colonel Piki at all places within Zimbabwe as may be reasonably practical, and report on such search to the Registrar of the High Court, on every alternate Friday.

She also wanted the respondents, who included Home Affairs and Cultural Heritage Minister, Defence and War Veterans Minister, State Security Minister, Zimbabwe Republic Police (ZRP) Commissioner-General and the Director-General of the Central Intelligence Organisation to be ordered to inquire from, and where necessary obtain any such information as may be necessary for the investigations from mobile service operators to try and locate Retired Lieutenant Colonel Piki through tracing the mobile numbers that were on his person at the time of his abduction as may be provided by his family.

But on Wednesday 28 November 2018, Sarukato withdrew the application which had been set to be heard by High Court Judge Justice Sylvia Chirawu as the remedy that she was seeking had since been overtaken by events after Piki managed to escape from his abductors somewhere around Mazowe area, Mashonaland Central province and returned to safety.

Soon after his return to Harare on Tuesday 27 November 2018, Piki sought audience with the Commission of Inquiry to go ahead with giving his testimony. However, his request was declined with the officers of the Kgalema Mothlanthe-led probe team indicating that they had completed hearing evidence from all witnesses. 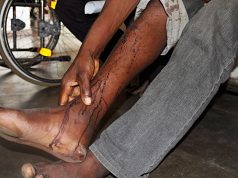